Pineapple bun is a popular breakfast item sold mainly in a cha chaan teng (Hong Kong style cafe). It’s a fluffy bun topped with a crispy buttery crust. You can eat it on its own or with a slice of butter. Better still, fill the bun with tasty char siew and sauce and you will have an amazing and filling Pineapple Bun with Char Siew (叉燒菠蘿包) for breakfast, morning or afternoon tea. There is no pineapple in the bun, it is called pineapple bun because the crust resembles the skin of a pineapple.

1. Make the roux by combining bread flour and water. Stir until dissolved. Heat over low heat and stir constantly until it forms a thick roux. Remove and set aside.

2. Mix all the dough ingredients, including the roux (under 1) in a mixing bowl or food processor.

3. Use a food processor to knead into a dough (takes 10 mins on medium speed). This can also be worked by hand – stir until lumps are formed and knead by hand until elastic and shiny. This may require dusting of flour to avoid sticky hands.

4. Grease the bottom of a bowl before placing the dough ball into the bowl. Cover with clingwrap and set aside to double in size for 45 mins. Set it on top of a warm bowl of water if the environment is cold.

5. Cut the dough into 8 equal portions and knead each portion into a ball. Flatten and place a tablespoon of char siew and sauce into the middle. Pull up the sides to encase and shape into a bun.

6. Place buns on baking paper, cover with plastic wrap and allow the buns to double in size over 1.5 hours.

4. Add bread flour and baking powder. Stir until a soft dough is formed. Store in the fridge for 15 mins.

5. Divide into 8 equal portions. Flatten with palm over a plastic wrap. Drape over risen bun. Glaze with beaten egg. 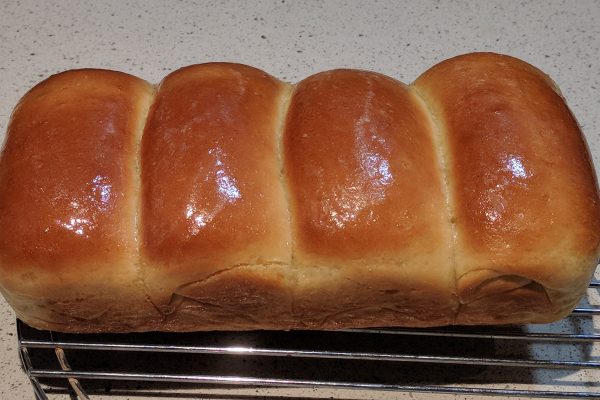